Explanation of the Lodge Banner

​The following is an extract from an oration of an explanation of the Lodge Banner at its dedication on Saturday 24th June 2017 by W.Bro. Saptak Santra, DAGDC
(Director of Ceremonies and Past Master (2008), The Lodge of St. George No. 1152).

Introduction:
From time immemorial men have marched and gathered under banners which have enabled them to proclaim their allegiance, whether to a man, a country or an ideology. When we were initiated into the mysteries and privileges of Freemasonry we were each invested with the distinguishing badge of a mason, that of a white lambskin apron, and we were told that “it is more ancient than the Golden Fleece or Roman Eagle, more honourable than the Garter or any other Order in existence” and we were charged to ensure that our future conduct would never disgrace “that Badge”.
By that passage we are introduced in an indirect manner to our first banner, that of the Roman Eagle which was adopted as a banner by Consul Gaius Marius in 103 BC and men marched behind it because it was the visible symbol of the Senate and of the People of Rome, as further identified by the inscription “SPQR” beneath it (Senatus Populus Que Romanus) . In battle it was a rallying point symbolizing Loyalty, Fidelity and Unity. This ancient tradition is followed by the banner before us today, which reminds us of our duty and fidelity to The Great Architect of the Universe and acts as a rallying point for the Principles upon which our Fraternity in general, and this Lodge in particular, are founded. 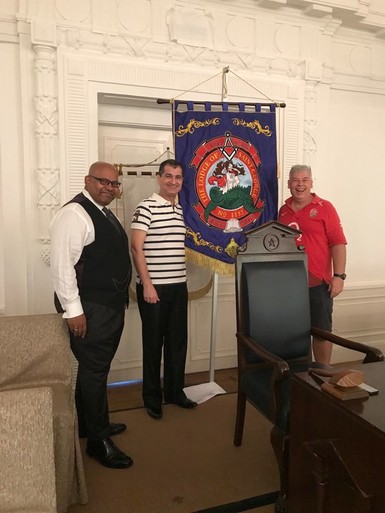 Banners in Masonry:
Banners have ever borne a close association with Freemasonry.  They are explicitly referred to in the opening of Grand Lodge or District Grand Lodge, where the Pursuivant or Inner Guard is asked “What is your duty” and he replies “to give a due report of all approaching Brethren and to see that they are properly clothed and ranged under their respective Banners”. Although the brethren so assembled have no visible banners with them, symbolically this means that Grand Lodge is composed of Lodges, each with its own particular characteristics - its “Banner”, each contributing to the beauty and harmony of the whole Order.
​
The Lodge Banner:
The banner was conceived, designed and drawn entirely by members of the Lodge, the artwork being supplied by Bro. Rey Villegas.  This follows the tradition of the previous banner which was designed by W.Bro. Dr. Charles Herbert Withers-Payne OBE in 1948 (who incidentally also designed the arms of the University of Malaya).  Withers Payne’s Raising as a Master Mason, on 23 January 1942, was the last meeting of this Lodge before the Japanese occupied Singapore and stopped Freemasonry in Coleman Street.  Despite the years of internment, he became Master of the Lodge in 1954 and went on to become District Grand Registrar. Sadly he left Singapore under suspicious circumstances when in October 1958 he had been found by his partners to have misappropriated client funds.  He was disbarred and left for Tanzania where, bizarrely enough, he was awarded the Order of the British Empire for services to the Crown.
So we now move to a description of our new banner. Obviously, the ideal objective was for our new banner to be reflective of the multinational, multicultural, peaceful, fraternity which the lodge represents.  However when your stock image is that of a very English portrayal of a Christian Saint killing something, that presents more than a few challenges!
Our new Lodge Banner, much like the old, depicts the quintessential legend concerning the Christian Saint that is Saint George:  that of a warrior knight slaying a dragon.  This symbolism can have multiple meanings just within the Christian tradition, not to mention the fact that the story of a hero slaying a mythical creature, often to rescue a damsel in distress, plays across a number of different cultures. 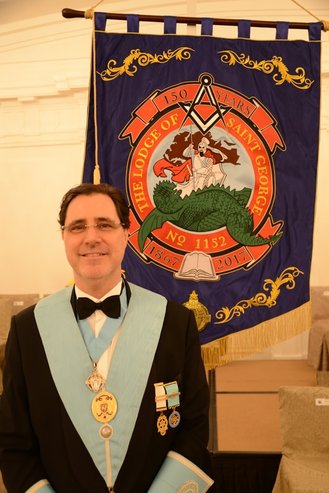 The standard iconographic interpretation of the image originates from a legend brought back with the Crusaders. The lance (or in some versions of the story, the sword) that Saint George used to slay the dragon, has its own name, “Ascalon” named after the city of Ashkelon, the oldest and largest seaport in Canaan and which during the Crusades, was an important city due to its location near the coast and between the Crusader States and Egypt. In 1099, shortly after the Siege of Jerusalem, an Egyptian Fatimid army that had been sent to relieve Jerusalem was defeated by a Crusader force at the Battle of Ascalon, a battle that is widely considered to have signified the end of the First Crusade.  The depiction of Ascalon is said to evoke a sense of righteous power and victory over a force of darkness and oppression.

It obviously references the Lodge’s English roots though as many of you no doubt already know St. George is not just the patron Saint of England, but many other patronages of Saint George exist around the world, including: Egypt, Catalonia, Greece, India, Iraq, Palestine and Russia – so not just England but pretty much every country England has decided to invade over the course of antiquity!
​
But we are of course a lodge based in Singapore and we felt it important to recognize this local connection – as a result you will now see the figure of St. George in front of a map of the island of Singapore, coloured in red.
Compared to our previous banner you will also note that the act of dragon slaying is a little less bloodthirsty, with the dragon appearing in side profile with the dragon’s face being moved around and not depicting the spear being thrust down its throat.  The reason for this was again to be reflective of the lodge being in Asia - dragons are often held to have major spiritual significance in various religions and cultures around the world, and in Asian cultures in particular, dragons still are revered as representative of the primal forces of nature, religion, and the universe.
The depiction of various grains is to denote plenty.  At this dedication of the new Banner the Lodge is fortunate to be the largest in the District in terms of membership, with 125 members.  This “plenty” was, of course, not always the case and there have been times throughout its distinguished and proud history when it has had to fight for its very survival.  Thankfully that is not the case today and so it was considered appropriate to give thanks for the bounty that the lodge currently enjoys in terms of members and prospective candidates.
Also making an appearance is our Hallstone Jewel, the significance of which is well known to many and is explained every year at the installation meeting of the Lodge, when it is passed to its successor. 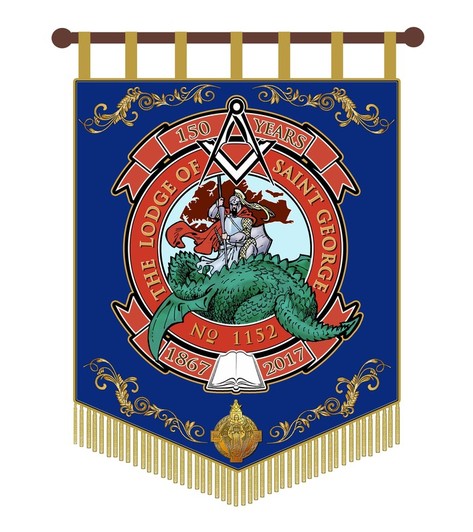 ​Colours:
In heraldry, which is a very specific discipline, colours carry a great weight of significance.  The background is Dark Blue, which like the regalia of some of the more distinguished members present here today derives  from the Premier Grand Lodge ruling that Grand Officers were to wear the blue of the then reigning Hanoverian dynasty.  To Freemasons, the colour blue has become emblematical of universal beneficence and charity, and it teaches that, in our hearts, those virtues should be as expansive as the blue arch of heaven.  The use of blue also has a more practical reason – it hides dirt better!
​
The Gold of the Fringe and detailing represents Generosity.
The Red of the cape and borders suggests Fortitude and Passion.
The White of the VSL is emblematic of Harmony and is symbolic also of Peace and Serenity.

And so it is appropriate that today we dedicate this Lodge Banner - symbolic of the members of this Lodge - who have declared their Faith in the Great Architect of the Universe and to the Lodge which this banner represents.